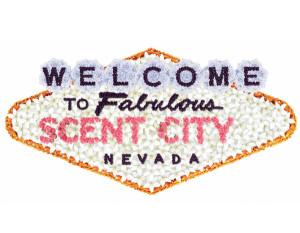 The word “CASINO” doesn’t typically bring to mind thoughts of delicate white florals and leafy green notes, but step inside Venetian and Palazzo and that’s exactly what you’ll smell—if you have a keen enough nose. Walking through Venetian’s grand lobby used to mean taking in what was once the most distinct scent on the Strip (for better or worse, depending on who you ask), but now it has been replaced using the very latest in laboratory experimentation and social analysis. It is not alone: Up and down the country’s most famous line-up of resort casinos, top hotel executives are discovering that redoing their scent profiles can have a huge impact on brand recognition—and the all-important length of time that gamblers last at the tables.

Lacing the air with fragrance has long been a strategy for appealing to casino visitors, but it’s within the past few years that the process of coming up with that perfect bouquet started to involve CSI-like analysis. Casinos are more than willing to take the extra effort: Research shows that odors have an enormous impact on gambling habits. In a study conducted by Dr. Alan Hirsch, the director of the Smell & Taste Treatment and Research Foundation, spending at Vegas slot machines odorized with a fruity, floral mixture saw a whopping 45 percent increase over ones without a sweet scent. “The odor might have given people a more optimistic perception of being successful,” he says. “Or it could have made them more relaxed and less anxious.”

That study was completed back in 1995, four years after the gaming industry’s leading scent marketer and provider, Brandaroma and its US division, AromaSys, was founded. “Back when we started, the idea of bringing scent into a resort sounded crazy,” says Neal Harris, president of the LA-based company. “But we figured out that with the right aroma, you can neutralize smoke and any unpleasant odors to create a fresh, clean experience that invites people to spend more time and relax.”

Since then, the technology and testing methods have grown into a remarkably concise endeavor. “It took us six months to develop the fragrance we’re currently using,” says Kim Cooper, assistant director of destination marketing for Venetian and Palazzo, who conducted their redolent research between February and August 2010. “Our previous one was very polarizing; people either loved it or hated it, so that lead us to a more scientific method for choosing a new fragrance.” 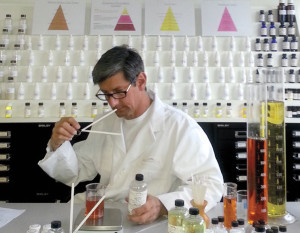 Three different rounds of testing were conducted with more than 800 testers. In the first cycle, 160 people were asked to rate seven different scents, ranging from light florals to heavy musks, which were atomized into separate suites. The top four were then dispersed into the Palazzo lobby and rated by another 200 people. “This phase took a month, because we had to pump in one scent for a few days and then pump it out before moving onto the next,” Cooper says. Two contenders rose to the top: surprisingly, the controversial original scent, and another that Cooper described as “welcoming, fresh, and not overpowering.” Finally, the two front-runners were pumped into the Venetian casino and lobby, and 500 people were asked to sniff and give comments. The new scent became the clear winner—a blend of white jasmine flowers, rose, Italian mandarin, and sandalwood layered with musk and amber, which the hotel named Arancia (Italian for “orange”). Since its debut, the scent has been so popular among guests that it’s been spun into candles that are for sale in the gift shop. Of its appeal, Cooper says, “It was my favorite from the first time I smelled it on the litmus paper.”

The scents inside the various Strip properties are as varied as the casinos themselves—ranging from tropical and beachy to spicy and gourmand. As a snapshot of how the process works, AromaSys’s Harris says clients meet with his team to discuss their fragrance desires and then choose one from the thousands in their library or design a customized “bespoke” creation. “About 75 percent of our clients go for the bespoke option,” he says. That list includes the Mirage, which wanted a tropical experience, “like you’ve stepped into paradise with sun-tan lotion and piña coladas all around you.” The result: a gentle mango and coconut-spiked scent. Down the street at Wynn, Harris and his team concocted a “fresh, rainforest-y” accord, while for Bellagio he’s created an array of scents that changes with the seasons and ranges from pumpkin and apple spice during the holidays to Japanese garden florals in the spring. After a recent trip there, Connecticut native Paul Citarella says he was impressed. “The air reminded me of a summer day, with a light and clean smell,” he says. “It’s subtle but sticks in your memory.”

That subtlety can be a powerful tool in garnering repeat business. The strength of olfactory senses as a memory trigger allows us to associate a scent or a note of fragrance in the air to a place, which can be a powerful and primal draw. “Odors can absolutely work in a subliminal way,” Dr. Hirsch says. “When you want to re-experience a nostalgic moment, a scent could make you want to return to the same spot.”

What do casinos pay for such nicely perfumed air? Depending on the size of the property and the type of systems used to deploy the scent—be it through the air conditioning vents or plug-in applicators—clients typically pay AromaSys between $200 to more than $5,000 a month to diffuse a scent. The preciousness of the ingredients is also a factor. “Something like rose or jasmine oil absolute are extremely expensive to produce and only used in very small quantities, since both cost about $10,000 per kilo,” Harris says. But the payoff could be well worth it. “In my experience, casinos are run by some of the smartest financially-minded people around, and when it comes to the numbers, they wouldn’t spend a penny on something if it didn’t generate that, and much more, in revenue.”

Hotels seem to agree with this perspective, even when gaming is not the objective. Vdara, for example, has piped two scents into the air since opening in 2009. “Over the years, we’ve discovered how important fragrance is to creating ambience,” says Vdara General Manager Mary Giuliano. “We really wanted to go with scents that were more exotic and unexpected, since that’s how we view the hotel.” A blend of green fig with a touch of cassis is used in the lobby while pink grapefruit notes swirl about in the spa. Devotees can purchase both as Scent Sticks in the gift shop, and in keeping with the property’s eco-conscious ethos, the fragrances are composed of natural essential oils and filtered through the interior without the use of aerosol. “Guests always tell us it smells amazing here,” Giuliano says. “They don’t know what the scents are exactly, but I can see how they transform people from the moment they walk in the door—there is this sense of calm, and you notice their shoulders relax.”

Designing more intimate “scent moments” like that is what Harris views as the next frontier in fragrance marketing. “It’s really exciting to think about how you can scent a moment, even a minute,” he says. His secondary company, Scentevents, recently mixed up an olfactory “wow” moment for Katy Perry’s California Dreams tour. “We scented all 127 of her concert venues with a cotton candy aroma since she’s surrounded by a cloud of it on her album cover,” Harris says. “It was a theatrical, multi-sensory experience.” (Not surprisingly, sales of Perry’s pink confection-scented perfume went through the roof.) “Scent is such a powerful thing,” Harris says. “It’s one of the strongest senses we have, and Vegas has been the perfect place to bring that magic.”